There was once a river so beautiful that all the animals came to drink from it. One day a giant moose came to this river.

“He’s so big!” cried out a beaver named Barney.

“Even bigger than Big Bear,” added Betty, another beaver.

“He sure is thirsty,” noticed Marty, a muskrat/ մշկառնետ/.

“He’s drinking so much that the river is going down!” yelled Mary, another muskrat.

“Our beaver dams will be destroyed,” warned Barney.

“And we’ll have no water to drink,” said Mary.

Big Bear, who had been listening the whole time said, “Let’s meet tonight and plan how to get rid of this pest.“

All the animals laughed at Fly. How was such a tiny creature going to help?

As the sky grew dark, Fly joined the others on the riverbank.

Barney started by saying, “I will gnaw on that moose’s legs until he runs away.“

“But he’ll kick you with his big strong hooves!”, warned Betty.

“We need another plan,” both muskrats said at the same time.

“I am the strongest,” said Big Bear. “I’ll fight that moose.”

“But the moose is twice your size!” said Fly.

The beavers and muskrats all said to Fly, “Be quiet. You are the weakest of all.”

The next morning, Bear was worried. Was Fly right? Was the moose truly twice his size?

But Big Bear did not move.

“Maybe we should try my plan,” Fly admitted. But all the other animals just laughed at Fly.

So, Fly flew onto the moose’s back. Holding on tightly, he bit the moose as hard as he could. 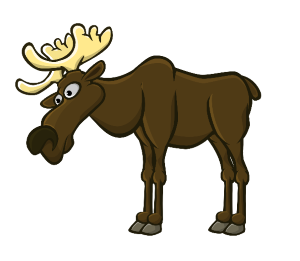 Fly flew up and bit the moose’s ear.

“Stop it!” the moose yelled.

“I’ll never stop,” said Fly, as he flew around and bit the moose on its leg.

The moose was unable to stop Fly, so he turned and ran. The animals never saw him again.

That night, the beavers made fish stew. The muskrats danced a special dance in honor of Fly.

“Hooray for Fly!” they all sang.

“You see,” began Fly, “even the weakest animal can beat the strongest if he uses his brain.”

One day a giant moose came to this river.

One day a giant moose came not to this river.

Came a giant moose one day a to this river.

The moose was unable to stop Fly.

The moose was not unable to stop Fly.

Was the moose unable to stop Fly.

The animals never saw him again.

The animals not never saw him again.

Saw the animals never him again.

“We need another plan,”

We not need another plan.

Need we another plan?

“I am the strongest,”

I am not the strongest.

Am I the strongest?

the moose is twice your size!

The moose is not twice your size

Is the moose twice your size?

All the animals laughed at Fly.

All the animals not laughed at fly.

Laughed all the animals at Fly.

“I will gnaw on that moose’s legs until he runs away.“

Will I gnaw on that moose’s until he uns away?

I will not gnaw on that moose’s legs until he runs away.“

Why didn’t the other animals think Fly’s plan would work?
a) Bear was too scared.
b) Fly was too small.
c) The moose was too fast.
d) Fly had a broken wing.
2) What problem was the moose causing?
a) He was destroying the animals’ homes.
b) He was being mean to the animals.
c) He was drinking too much water.
d) He was eating all their food.
3) Which line from the story shows that Fly is determined (strong-minded)?
a) “I’ll never stop.”
b) “Hooray for Fly!”
c) “But the moose is twice your size!”
d) “So, what’s the plan?”
4) Fly is the smallest animal in the story. In what way is he the strongest? Explain
your answer.

Because he was very smart and brave.

5) What was the moose doing that made the animals call him a pest?

“Moose drinking so much that the river is going down!
6. How Fly Saved the River
He saved the River, to prove he is strong.

3. Dad, there are some letters for you.

7. It is —- very interesting story about animals.

2.  It needs an aquarium to swim. Change the water and clean the quarium regulary. Feed your pet special food once a day.

It is a fish

3. It needs a warm house. It needs rocks and plants to climb on. Feed it insects, spiders, mice or rats and give it water to drink.

It is a lizard

4. It is very friendly and likes to play outside. It sleeps a lot and needs quiet and warm place to rest. Feed it special biscuits, meat or fish and water to drink.

It is a cat

5. It needs a cage where it can run around and a box to sleep in. Feed your pet seeds, nuts, fruit and vegetables and give  water to drink.

It is a hamster

6. It needs a big cage. Don’t forget to clean the cage. Pet your pet fly outside the cage regularly. Feed your pet seeds and give water to drink.

It is a parrot